Liquid penetrant testing is a NDT method used to locate surface-breaking defects, such as cracks or seams. The technique is extensively used for the inspection of all nonporous materials – metals, plastics, or ceramics – and both ferrous and non-ferrous materials.

A liquid penetrant is applied to the surface of a defective part. After a certain period of time, the excess penetrant is removed and a developer is applied. The developer helps to draw penetrant out of the flaw and shows the inspector where the material is damaged.

Liquid penetrant testing depends mainly on a penetrant's effectively wetting the surface of a solid workpiece or specimen, flowing over that surface to form a continuous and reasonably uniform coating, and then migrating into cavities that are open to the surface. The cavities of interest are usually exceedingly small, often invisible to the unaided eye. The ability of a given liquid to flow over a surface and enter surface cavities depends principally on the following:

In practice, the liquid penetrant process is relatively simple to utilize and control. The equipment used in liquid penetrant inspection can vary from an arrangement of simple tanks containing penetrant, emulsifier, and developer to sophisticated computer-controlled automated processing and inspection systems.

The liquid penetrant testing consists of the following steps:

The most critical step if liquid penetrant testing is the preparation of the surface. The surface must be free of oil, grease, water, or other contaminants that may prevent penetrant from entering flaws.

A liquid with high surface-wetting characteristics is applied to the part’s surface.

The penetrant is left on the surface for a sufficient time to allow as much penetrant as possible to be drawn from or to seep into a defect. The times vary depending on the application, penetrant materials used, the material, the form of the material being inspected, and the type of defect being inspected for. Minimum soak times typically range from five to 60 minutes.

A thin layer of developer is then applied to the sample to draw penetrant trapped in flaws back to the surface where it will be visible. Developers come in a variety of forms that may be applied by dusting (dry powdered), dipping, or spraying (wet developers). The developer is allowed to stand on the part surface for a period of time sufficient to permit the extraction of the trapped penetrant out of any surface flaws.

A visual inspection is performed to detect indications from any flaws which may be present. The penetrant used is often loaded with a fluorescent dye, and the inspection is done under UV light to increase test sensitivity.
Advantages and disadvantages

Like all NDT inspection methods, liquid penetrant testing has both advantages and disadvantages. 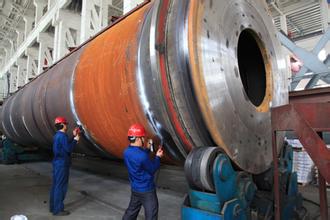